Forsythia is one of my favourite garden shrubs, the yellow glow of their flowers on bare stems in Spring is magnificent. Although they are still quite rare as bonsai, when you do see one in flower you can’t fail to be impressed by them. I have been looking for some suitable material to start one for some time now and last year I was able to remove the specimen you see in the following pictures from a friend’s garden.

The next 2 pictures show the tree at the end of its’ first season in a pot. In a single season it had filled this 9 inch pot with strong healthy roots.

In late Winter, I pruned it back and carried out some basic carving on the trunk. This is how it looked at that time.

In early Spring of this year, I took it out of the plastic pot, cut back the roots and re-potted it in an clay oval training pot. I removed as much of the roots as I felt I could without killing the tree but it will probably need further root reduction in the future to fit it into its’ final pot. This is how it looked after the re-pot. 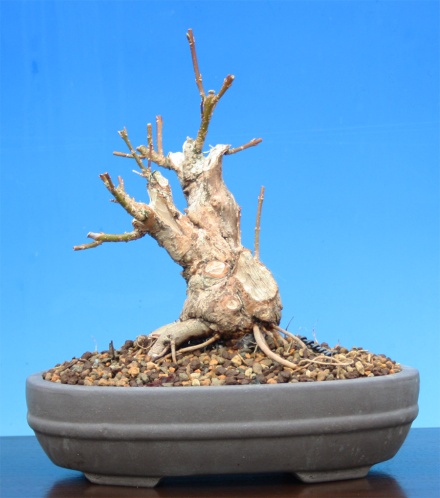 With the recent increase in temperature, it burst into life about 1 week ago and not surprisingly, considering the work I’ve done on it recently, it went straight to leaf without producing any flowers. Hopefully next year I will begin to see it flower again.