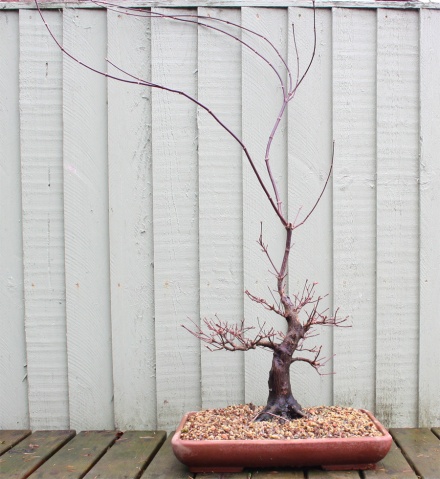 With the 2016 season at an end, its time for me to assess the progress I have made this year with 2 acer palmatum bonsai trees that I am developing; one from seed and the other from shop bought material.

The first one, which was started from seed in 2001 has spent all of its’ life in a pot. I started to train it as a bonsai in 2013. The nebari has a 5 inch (12.5 cm) diameter and the base of the trunk is 3 inches (7.5 cm) wide. This is a very slow process and its only through photography that you can appreciate the progress.

Today November 2016 after the removal of the sacrifice branches. I will select the shoots I want to keep and wire the new growth in the Spring.

The second one was bought from a local supermarket in 2012. This is how it looked in the spring of 2013.

November 2016 before removal of the sacrifice branch

November 2016 after removal of the sacrifice branch. Still a long way to go but this one is beginning to look like a tree.

This tree was wired and styled for the first time in February 2016. Regular readers will remember that it was cut back from a larger one in 2015

An earlier post that explains why the tree was cut back and started again can be found by clicking on the link. The intention of the first wiring was to set the primary branches and to form a new apex. The next picture, which was taken after the wire was removed shows how successful this has been within a single season.

All the unnecessary growth has been pruned off to encourage finer ramification and the tree has been rewired today. This is how it looks at the moment. 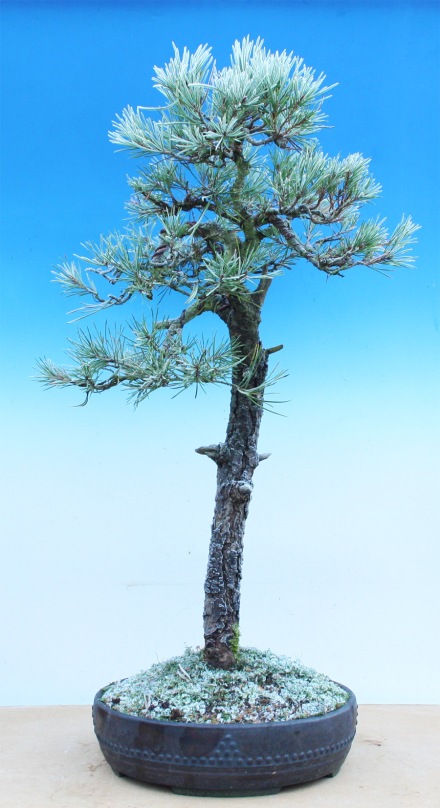 The night time temperatures have plummeted in my part of Scotland this week to around -5 degrees C., heralding an early start to our winter. I still have some trees outside but they will all have to come inside today.

Here is a photograph of one of my Scots Pines, which I took this morning. It will give you an idea of the conditions that the trees are putting up with at the moment.

Remarkably, this Kiyohime maple, which has been in the greenhouse for about a month is still managing to cling on to its’ Autumn colour. It’s the last of my deciduous trees to do so.

As the night time temperatures begin to fall below freezing in my garden, it is a reminder that I will have to bring the remainder of my trees into the greenhouse very soon. Most of the tender species are already inside but a few of the hardier ones are still braving the elements. Before I bring them inside, I like to clean them up and remove all unnecessary growth.

Today, I found the time to work on this boxwood. Buxus grow quite slowly when cultivated in a pot and only need pruning once a year.

This is how it looked from the front before todays’ work.

And this is how it looks at the moment.

When viewed from the right you can see that most of this seasons growth has occurred at the back of the tree. I think this has happened because I forgot to turn it as often as I should have.

This is the earliest picture I have of this tree, taken in 2005, shortly after it was collected from my garden. 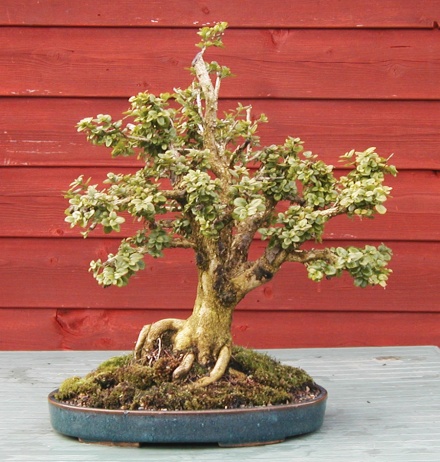 Today, I cut back this year’s growth on my Pyracantha. After 3 seasons in this pot, it is beginning to look less like a stump and a little more like a bonsai. When it was planted in the pot at the start of 2014, it didn’t have many roots, so next Spring I will remove it to see how the roots are developing. It still has a long way to go but it is beginning to make a pleasing image. The start of this project can be found by clicking the link to this earlier post. 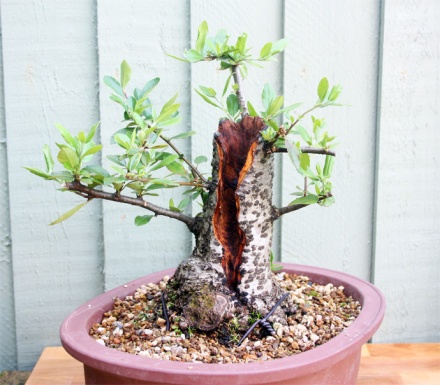 Early 2014, prior to carving and re-potting 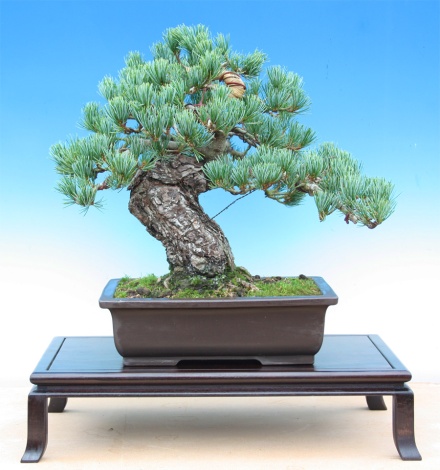 Gerry brought his chuhin white pine to my garden this week to get some advice on how to take it forward. 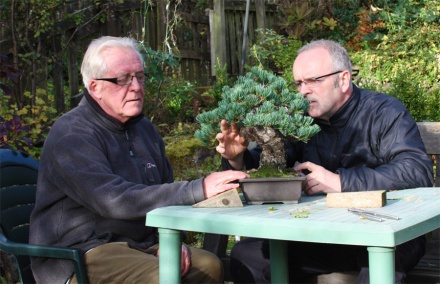 This is how it looked before the current work 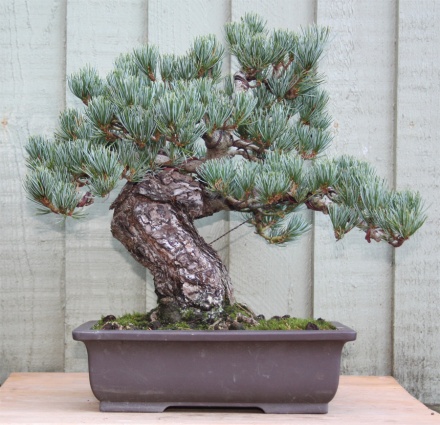 I felt that the apex was sitting a little too far to the right and the outline of the tree could be improved by moving it more to the left and above the main trunk line..

Here is an overhead view of the tree, which shows the existing position of the apical branch. The yellow arrow indicates the apex curving round to the right and the red arrow indicates where it needs to go.

The next picture taken from the left shows how thick the apical branch is with its future position in the foreground. 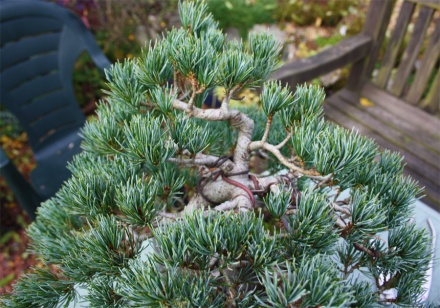 We decided to wrap the apex with raffia before bending

And this is how it looks at the moment. Better I think