This is the tree that I purchased for £1.00 in 2012 from the price reduced shelves in a local food store. I thought, at the time, it would be suitable material to make a deciduous bonsai as it had been grown from seed and did not have an ugly union with the rootstock at its’ base.

In the Spring of 2013 it was planted into a training pot and allowed to grow freely. 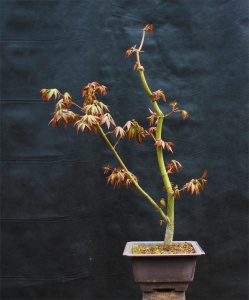 In 2014 it was transplanted into a larger pot and again allowed to grow freely.

At the end of the 2014 season it was chopped back as shown in the next picture.

It was then replanted into this shallow oval pot. The trunk was reduced further and a new shoot was wired up to form the new leader.

The new leader grew well this year despite the poor weather 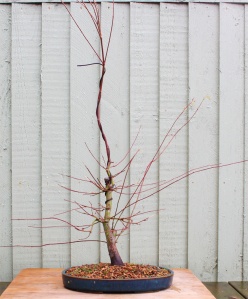 This is how it looks at the moment with the stump removed and the leader cut back. It’s beginning to look like a bonsai. 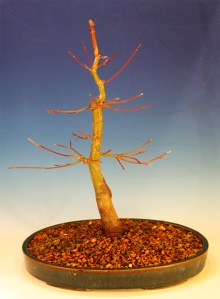 Both of these trees started life in a pot a little larger than they are now. When I first got interested in shohin in early 2012 I decided that I would start by chopping back a few trees that I had dug from my garden a few years earlier.

This is how the first one looked in January 2012. I never really liked the bleached deadwood on this specimen and the lower trunk was very straight and lacked taper.

In March 2012 it was cut back close to the base. New buds began to sprout out almost immediately.

This is how it looks at the moment after 3 seasons development. It’s due a re-pot next year and the carving round the chopped area could be refined a little more. 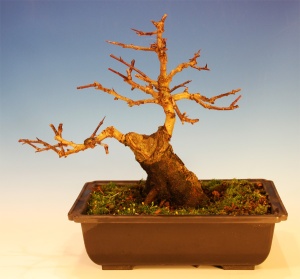 Until 2011, the next tree was growing in a deeper pot than the one shown in the following picture. It’s massive roots were completely hidden until I re-potted it in the spring of that year. In 2012, I chopped the trunk off altogether and decided to continue the trees’ development using only the roots. 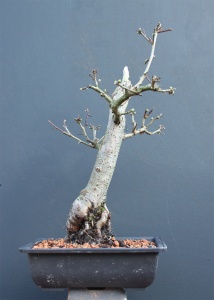 This is how it looks after 3 seasons. Still needs a lot more ramification but I am pleased with the image that is emerging.

Today, between some very heavy showers, I found a little time to evaluate this years development in an Acer Palmatum, which was started from seed in 2001. Another post outlining the early history of this tree can be found here.

This is a reminder how it looked at the end of last year. The red line shows where I intended to chop the trunk in the Spring and the red arrow shows the shoot that would become the new leader. The tree needed a bottom branch at the right hand side and the blue arrow highlights the shoot that will be used to form it.

After a full seasons growth the new leader and the bottom branch have extended by about 3 feet. The lower branch was allowed to extend freely to increase its diameter and balance it with the lower left branch, which incidentally has taken 5 years to reach the stage it has.

This is how it looks at the moment after cutting back the extension growth, removing the stub on the trunk that was left over from last year and wiring the useful new growth. The thin shoot at the top left will become the new leader next year. This is a slow but very satisfying journey. 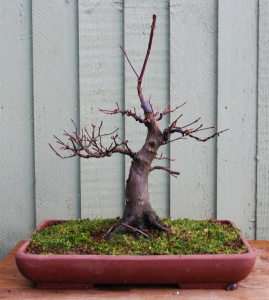 It’s that time of year, when the trees have stopped growing and the weather is throwing its worst at us that the club comes into its own. Yesterday about 20 members and visitors braved the elements on a stormy day to attend the monthly meeting of the Lanarkshire bonsai club at Wattston Bonsai. Some were working on trees while others were happy to drink tea and talk bonsai with those who share their passion. Here are a few pics from the day. 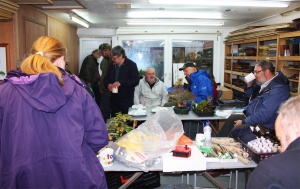 Ian McMaster tackling an initial styling of a collected cotoneaster

Robert Porch advising Stuart on the fine pruning of a Chinese juniper with Mike Box, who travelled up from south of the border hiding in the background (nice to see you there Mike).

New member Artur Powszek, who was one of the interpreters for the demonstrators at Bonsai Europa, contemplating a white pine with our Gordon. Cheer up Gordon it will soon be Spring again.