This is another new purchase I made at Noelander’s this year. A nice incised oval from Bigei to add to my expanding collection from this retired potter. 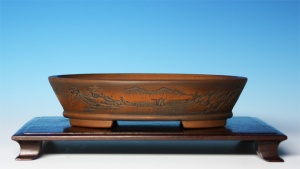 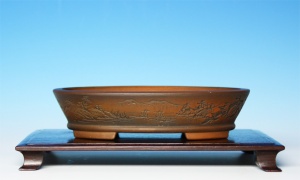 I wanted one of these pots from the minute Andy first posted them on Facebook. Terrific work from a terrific potter 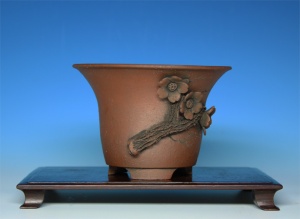 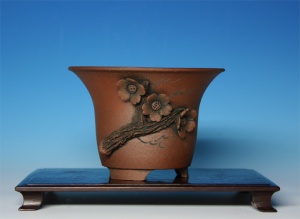 Sorry about the delay in compiling this post on Noelander’s 2015 but I am still recovering from, what was for us, a very exhausting though highly stimulating 5 day adventure, which included a 1350 mile round trip by road and sea.

I thought last years event in Heusden- Zolder was terrific but the new venue at the Limburghal Genk has raised the show to a whole new level of excellence. The increased space in the exhibition and traders halls ensured that at no time, did it feel overcrowded. The issues that were given for the banning of photography last year seem to have been resolved by the increased area. Having said that, despite the ban, there were many people taking pictures inside the exhibition and quite a number of them have already appeared  on the Internet. As an averagely obsessed hobbyist and small scale blogger, who feels obliged to uphold the rules for fear of prejudicing my chances of having a tree accepted in the future, I personally feel disadvantaged by this. I sincerely hope the organisers will consider lifting this ban for next year; after all, in the same period, the Japanese have lifted the ban on photography at major shows and it would seem that the effect has been to open the shows up to a wider international audience.

Now for some pictures

Arrival at a misty Calais

Arrival at the venue on the first day. The queue was maintained for several hours after the doors opened, which I am sure pleased the organisers.

and this is how it looked, later in the afternoon 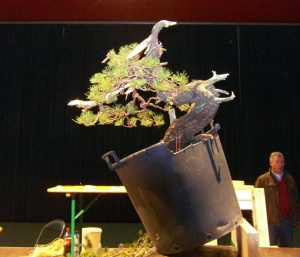 On Day 2, Ryan was presented with this very challenging yew with a straight trunk at the base and numerous branches emerging from the same point 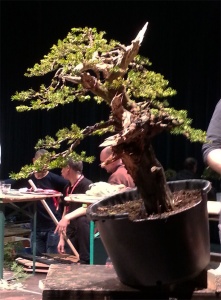 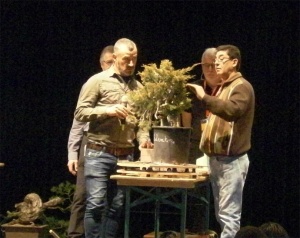 On day 2 he had a pinus sylvestris to work on 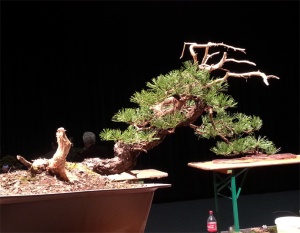 Seok Ju Kim from Korea, was a new face to most but he will be long remembered for his wizardry over the 2 days. On both days his material was particularly challenging both in scale and complexity. What this guy did in 2 four hour sessions would take most of us 2 to 4 years

His day 1 tree before and after 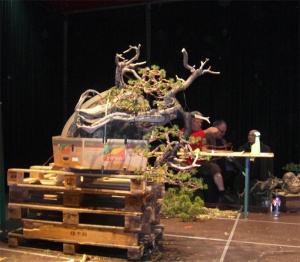 His tree on Day 2, before and after. 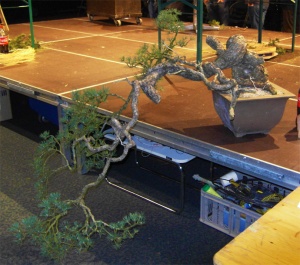 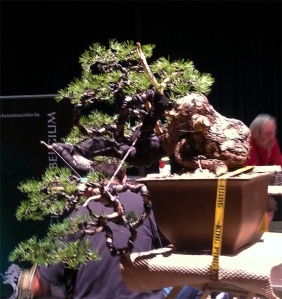 To end with, I really must say something about the town of Hasselt, where we stayed for 3 nights during the event. It’s a beautiful town about 10 miles from the venue, filled with amazing civic art, trendy shops, restaurants and traditional Belgian bars serving some of the world’s finest beers. If your planning a trip with a partner, who maybe isn’t as keen on bonsai as you are, they will love it.

Oh, and I bought some pots too.

Today Ayr Bonsai Club on the west coast of Scotland played host to one of the best known faces in the bonsai world, Tony Tickle.

Tony provided a very informative talk on the development of 3 hawthorn trees from his collection and later in the afternoon carried out a critique on some of the members trees.

I had never seen Tony in action before, so this was an opportunity not to be missed. His  delivery is friendly, informal and entertaining and includes an excellent photographic history of his trees. The critic part of the event was helpful, informed and mindful to the sensitivities of the owners.

All in all, a very entertaining afternoon 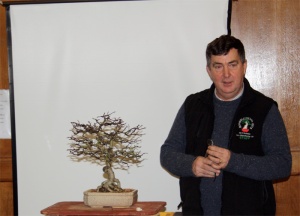 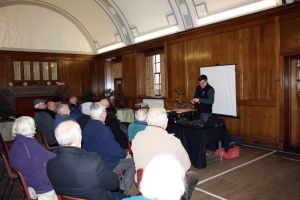 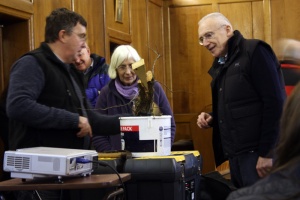 Although we are still immersed in the coldest part of our winter here in Scotland, there has been a perceptible change in my local environment this week.

The greenhouse, where I keep my trees in the winter, is situated in a part of the garden that gets no direct sunlight during the months of December and January. Today the sun has at last reached the height above the horizon, where it can again fill this area with its rejuvenating light. The temperature is rising and the buds of early flowering species like Chojubai and Prunus Kojo No Mai are beginning to swell. An early sign that Spring is on the way. Hallelujah. 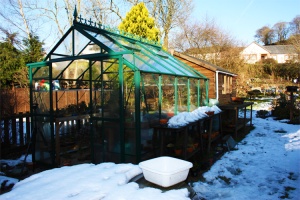 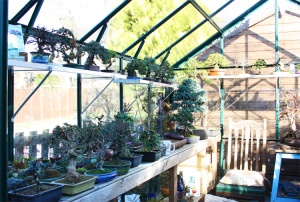 Unfortunately I missed this months meeting of the Lanarkshire Bonsai Club, which is held on the first Sunday of the month at the premises of one of Europe’s largest importers of Japanese Bonsai, Wattston Bonsai. However, on the Saturday before the club meetings, Dougie Smith, the proprietor, has an open day when enthusiasts from all over the country, can come to stock up on supplies, work on their trees and catch up on all the bonsai news over a cup of coffee.

I needed to stock up on soil for the forthcoming season, so I braved the snowy conditions and made the journey, it’s always worthwhile.

Club member Jim McMaster, took the opportunity to clean this yew using Dougie’s high pressure spray gun. I was very impressed with this tool, it does a terrific job of cleaning those difficult to reach areas between the branches of trees.

As always, we had a terrific afternoon in the finest of company.

Next month the new stock from Japan will be arriving, I for one, am looking forward to that