Today I spent some time re-potting the Scots Pine that was rewired over the winter. It also required a slight change of angle. This is a reminder of how it looked before todays’ work.

And this is how it looks at the moment in a new Chinese drum pot, which is more in proportion with the tree.

Here it is again, almost complete and back out on its’ plinth. 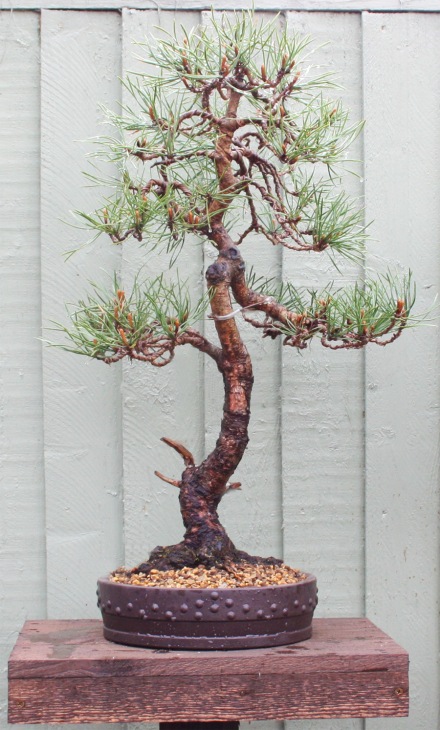 I acquired this medium sized Pinus Sylvestris in 2016 from a friend. I was attracted by the taper and movement in the trunk and I felt that given time I could make a nice bonsai from this material. The first picture shows the tree soon after I brought it home, having re-potted it into a good free draining soil mix and removed a few leggy lower branches that didn’t form part of my plan for the trees’ future. 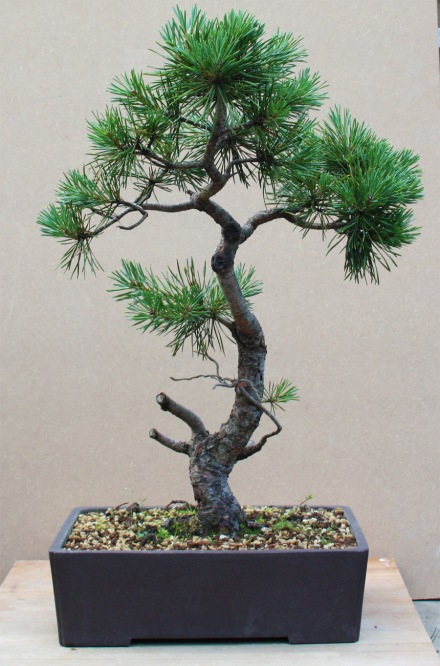 The second picture shows the tree in 2017 immediately after the first styling.

The next picture was taken in 2018 and you can see that it has filled out well in that time.

At the end of 2018, I thinned the needles to allow more light into the middle of the tree and to facilitate re-wiring in the new year.

A few weeks ago I re-wired the tree for the second time. I think it is shaping up well. At the next re-pot, which should take place in the next few weeks, the front will be moved by a few degrees to show more of the movement in the trunk. the next picture shows how it looks at the moment.

This post is looking at progress that has been made this year on trees I have been developing during my weekly sessions with Gerry.

The first is a Blaauws Juniper That was given to me as raw material by Philip Donnelly of Belfast Bonsai in 2015. It had a lot of thick branches that grew off the main trunk at awkward angles. The first job in 2016 was to cut it back to a simple outline retaining the one branch that was suitably positioned for the future development of a bonsai. This is how it looked at that time.

Since this initial work I have been feeding the tree with high nitrogen fertiliser to promote strong growth in the foliage and I have also begun to create some jins from the branches that were removed and a shari on the main trunk. This work was done in stages over the past 12 months as the pictures will show. 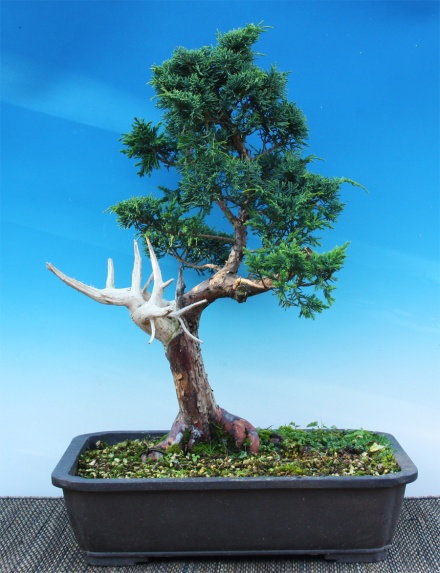 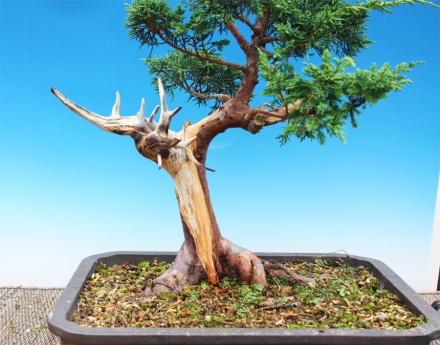 In the future, I intend to reduce the apex by about half and I hope to develop the tree as a semi-cascade.

The next tree is Gerry’s large hawthorn. It has good movement and taper in the trunk but at the start of this year it had very few branches and we hadn’t decided which side would be the front. We decided to plant it in a large box to push out lots of new growth. This is how it looked at the start of the season. 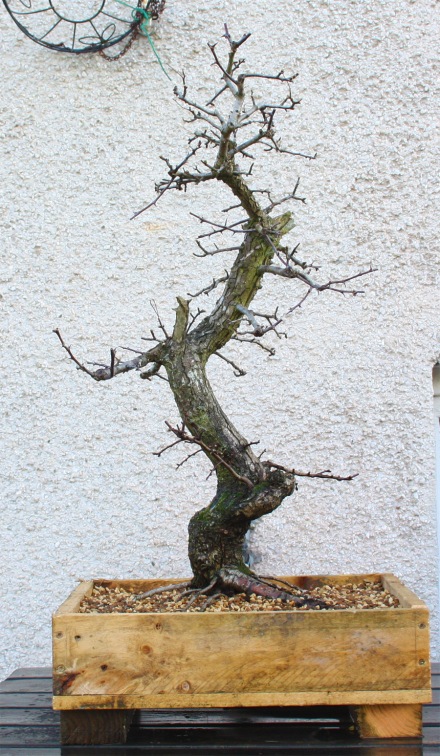 This is how it looks at the moment after a full seasons growth in the box. The first picture shows what will probably be the new front 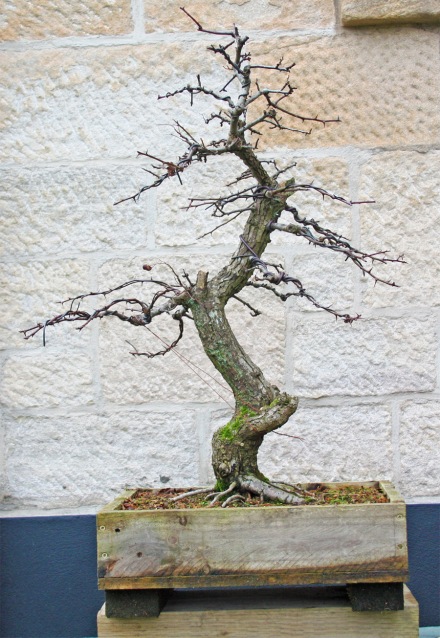 The third tree today is a literati pine which was wired for the first time in August 2015. This proved to be a mistake as the weather following the initial styling was very hot and the tree suffered losing several  branches. This is how it looked at that time.

This was the original tree in 2011 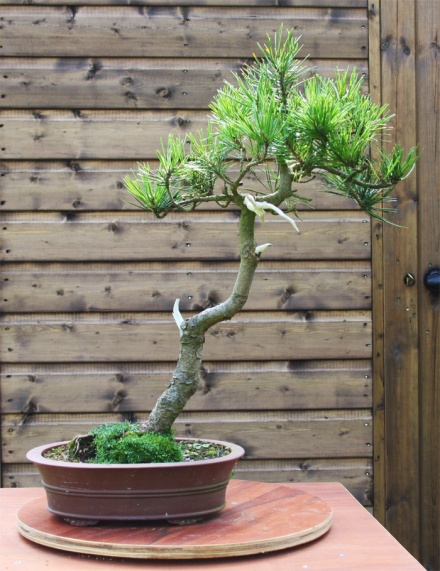 Gerry and I have started the end of year maintenance on our pines. This normally involves the thinning of the old needles and some of this seasons too, in areas of strong growth. When the thinning is complete, the trees have to be partially or totally re-wired to accommodate the new growth.

The first one I tackled was a Scots Pine, which had its first wiring in the literati style 3 years ago. This is how it looks at the moment after a second wiring. Unfortunately, I didn’t get a picture before todays work as its absolutely freezing in the garden and time outside was kept to a minimum.

The next picture shows how it looked some time after the first wiring in 2014. You can see that its filled out well in the intervening years 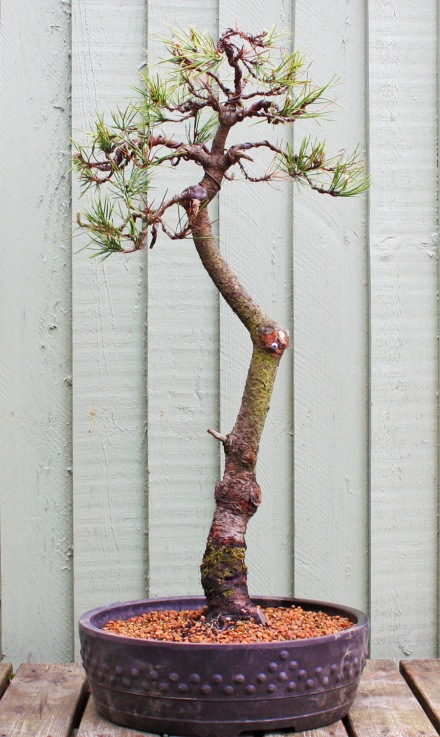 Gerry’s large Scots Pine also required some work. This is how it looks at the moment after thinning and wiring. 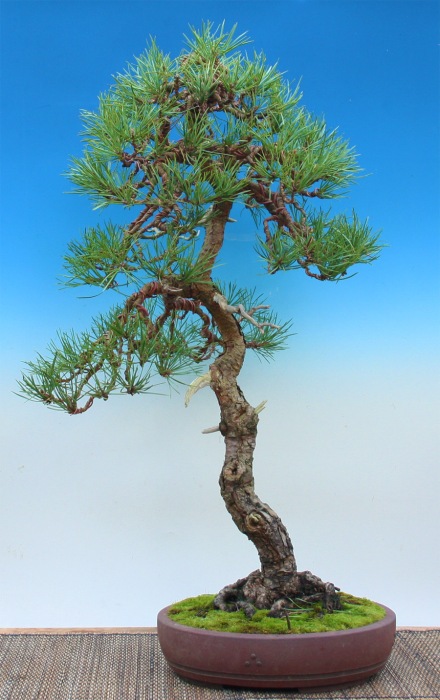 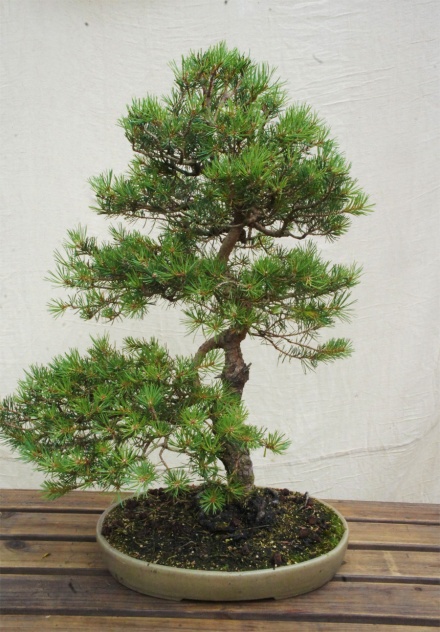 We finished off the session by restyling a small shohin white pine. this is how it looked before. 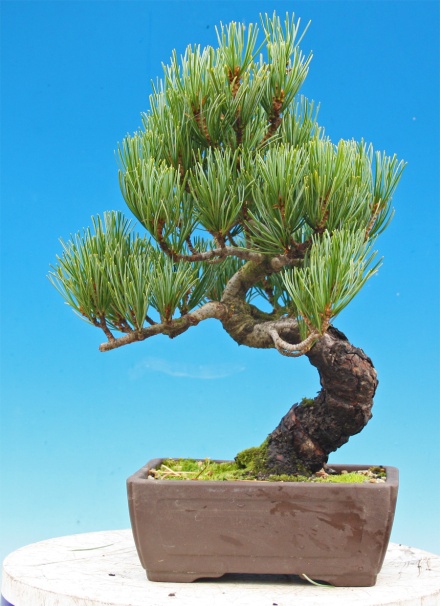 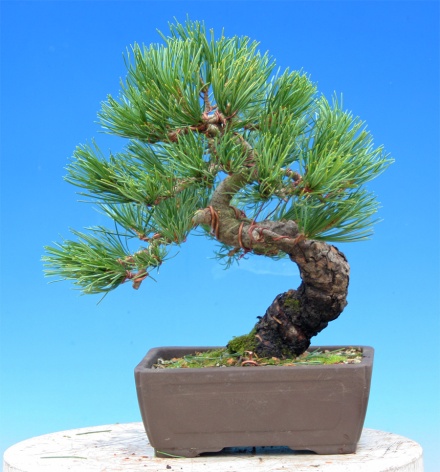 We still have plenty more to complete in the next few weeks. 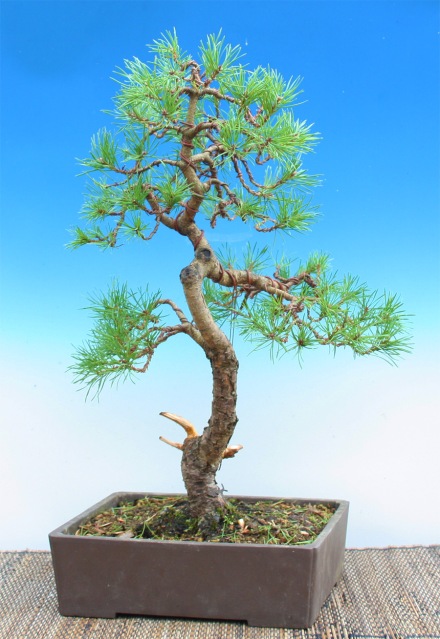 I acquired this thin trunk Scots Pine a little over a year ago from a friend. Some long thin branches at the base of the trunk were removed and the tree was re-potted into a clay pot with a good free draining soil mix. This is how it looked after the initial work.

and this is how it looked at the beginning of this week, 16 months after the previous picture was taken.

The needles were thinned ready for wiring and I jinned the stubs at the base of the trunk. 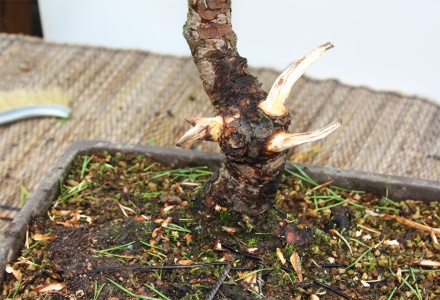 After thining out the foliage

When I met up with Gerry this week we decided to re-pot 2 recently acquired pieces of raw material into large wooden boxes, to speed up their development.

The first is a fairly large hawthorn with lovely movement in the trunk and nice aging bark but it lacks ramification. The pot that its currently housed in is ideal for a finished tree but a little small for a tree in development. The visible roots also need some work; that large root moving off to the right will have to be removed at some stage. 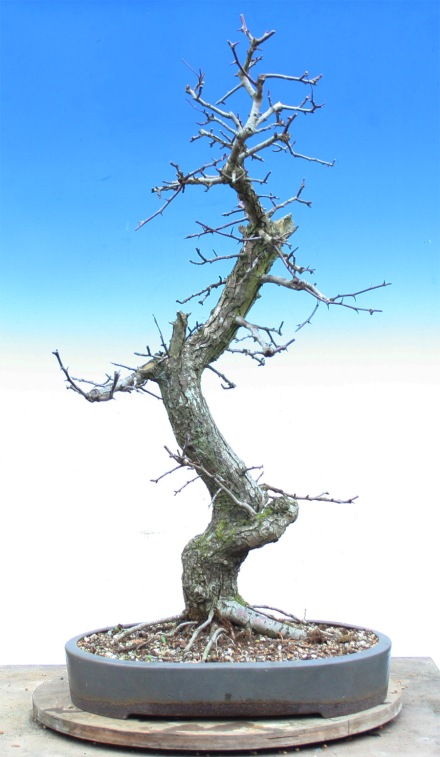 When the tree was removed from the pot, we could see that it had not been in there very long as the soil was not full of fine roots. The tree was potted up into the large wooden box you can see in the next picture without any further work for the present. It will remain here for the next few years, while the lower branches and roots continue to develop.

The second tree is a scots pine. When acquired, it came in a plastic washing up basin and the soil had a high proportion of soggy organic material in it. I do not like to see trees planted in wash basins because they are flat bottomed and when they are placed on the ground, this can inhibit drainage.

Our first priority was to remove it from the basin and get it into a better draining soil mix of akadama, kiryu and pumice.

This is how it looks at the moment. The plan for the immediate future is to fertilise this tree regularly to encourage back budding and reduce the length of the lower branches 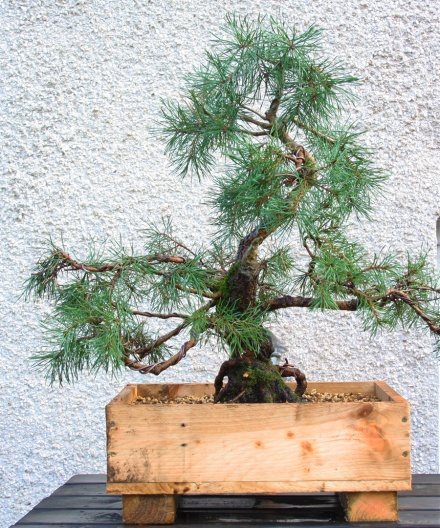 I had a visit from my good friend Gerry earlier in the week. He brought along a Scots Pine to get some advice on the next stage of its development. I have had a close involvement with this tree over the past 3 years. We agreed some time ago that the best way forward for this tree would be to train it as a Literati pine.

This is how it looked before this weeks work. After much deliberation we decided that the lowest right hand branch should be removed to emphasise the trees’ natural movement to the left 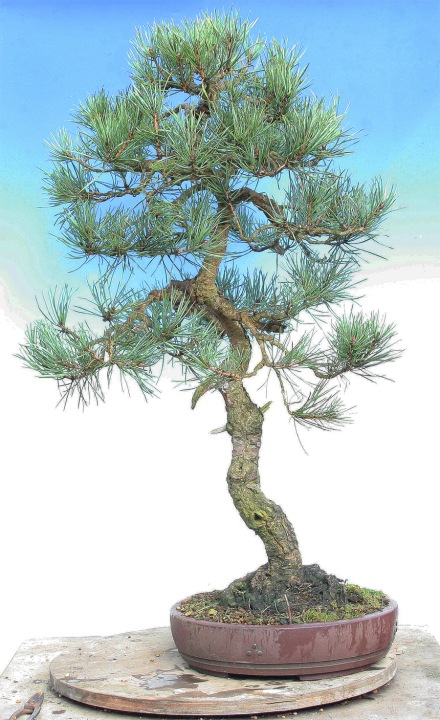 The next picture shows the lower right branch with foliage removed and the remainder of the branch jined. The lower left branch has also been thinned and wired into place. This is as far as we got during Gerry’s visit 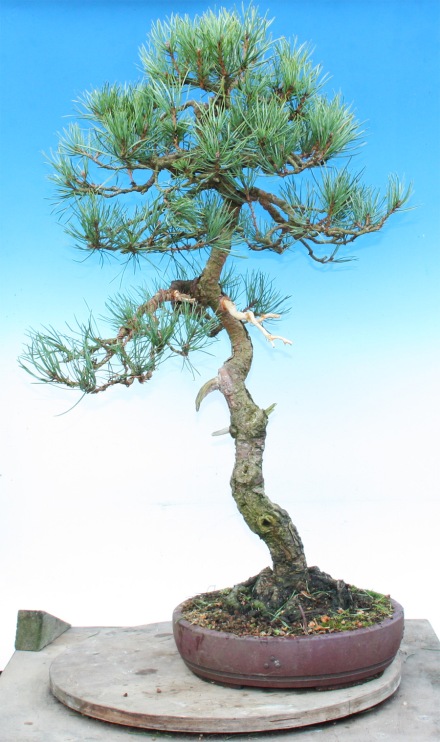 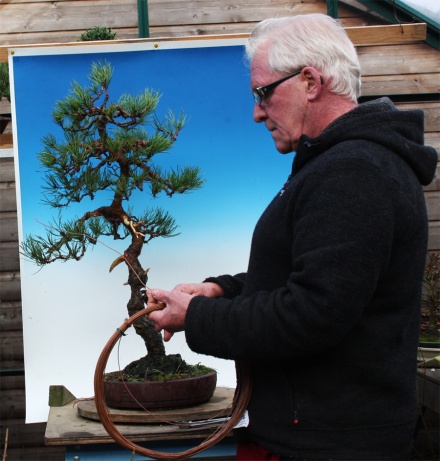 This is how it looks at the moment

This is how it looked after the previous wiring in 2015 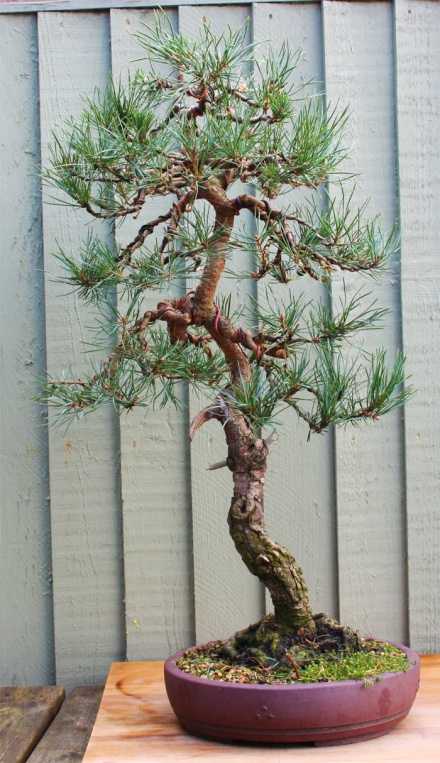 The night time temperatures have plummeted in my part of Scotland this week to around -5 degrees C., heralding an early start to our winter. I still have some trees outside but they will all have to come inside today.

Here is a photograph of one of my Scots Pines, which I took this morning. It will give you an idea of the conditions that the trees are putting up with at the moment.

Remarkably, this Kiyohime maple, which has been in the greenhouse for about a month is still managing to cling on to its’ Autumn colour. It’s the last of my deciduous trees to do so.

Here are 2 future shohin Pinus Sylvestris trees that I have in development at the moment. Both have quite a way to go but it’s that journey which gives me most pleasure in the hobby. 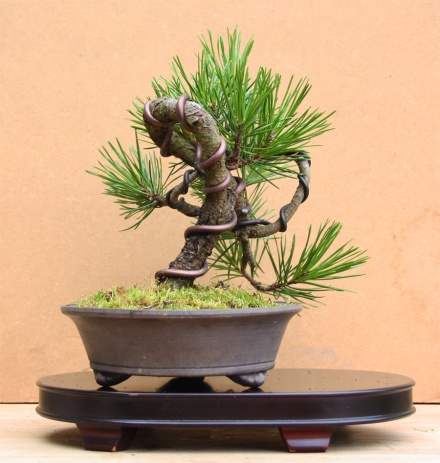 This is how it looked last year before its’ first styling

I started the next one about 4 years ago while it was still in the ground. The main trunk was chopped back which forced a lot of new shoots close to the trunk in a single season, many of these are now forming branches. 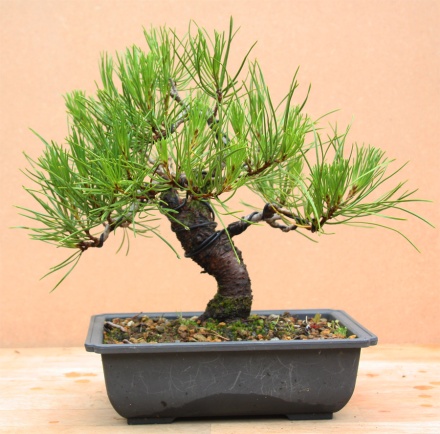 Here are some examples of raw material that I have acquired in the past year to create bonsai from in the future.

Pinus Sylvestris, collected last year with mature bark, a thick trunk and good movement and taper at the base. Height above the pot is about 55cm at the moment 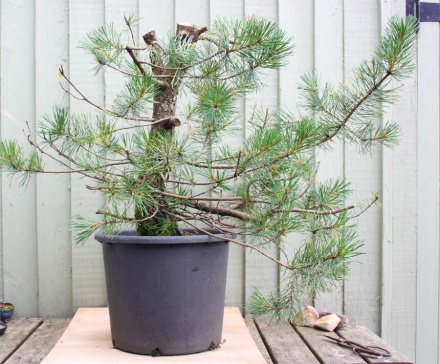 Great future potential here I think but it will need a few years more growth before it will be ready for a first styling.

Another thin trunk Pinus Sylvestris, acquired recently from a friend, which should make a nice literati in the not too distant future. About 50cm tall.

2 purple flowering examples of Rhododendron Indicum, collected by division from a large shrub in my garden, this year. I may air layer parts from these trees to increase my stock further 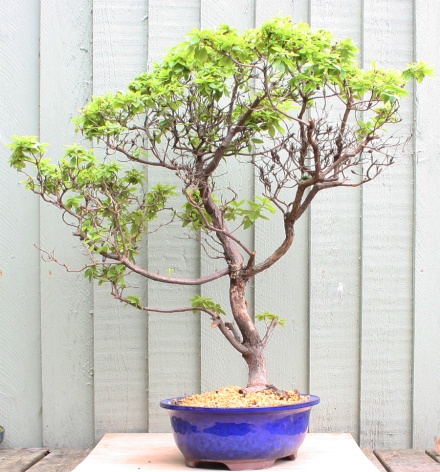