One of the 2 chojubai that I acquired earlier this year, which flowered profusely in the spring, is now in need of some seasonal maintenance.

This is a reminder of how it looked at the start of the season, when I brought it home. Although it had plenty of ramification, the scale of the branch development in relation to trunk thickness was out of balance in my view. It was always my intention to cut it back considerably but when would be the best time to do this. Information on the cultivation of this species is very limited outside of Japan but a trawl of the internet led me to some excellent articles on the Crataegus Bonsai blog of Michael Hagedorn. It would appear that late summer into autumn is the best time to re-pot these.

I’ve been concerned for a month or two, that drainage in the pot is not as good as it should be and that this was affecting the rate of new growth, so I removed it from its pot to take a look at the roots. The next picture shows what I found when I removed it from the pot. The pot was very full of long roots, which were spiralling round the outside of the pot. 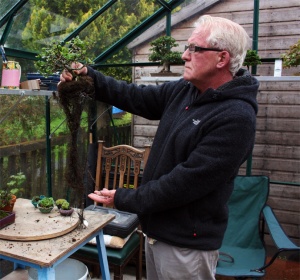 I pruned it back quite severely and re-planted it in this over-sized Yixing pot, tilting the trunk a little to the left. I will allow time for it to recover from the re-pot now. I think the future development will be mainly clip and grow. If it shows signs of vigorous growth next season, I will re-pot it into a nice Japanese pot that I have been saving for that very purpose 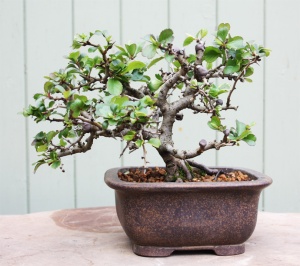 When I pruned the roots, I removed a few thicker pieces, which I have re-potted to see if they will bud