I bought this tree in August 2013. At the time of purchase it was in a small round pot, which was only marginally larger in diameter than the rock the tree is planted over. As soon as I got it home I re-planted it into this slightly larger blue glazed Chinese pot. Last year, the previous owner had removed the foliage in the apex and jined the branches. As a result of this, the new apex is still a little thin on top but a good Spring here in Scotland is ensuring that this weakness will be corrected in a few months.

This is another larch that was collected in March 2012 which has been given its first styling and first bonsai pot in March 2014. It is 44cm high, has a pretty reasonable taper and a good nebari. It has the potential to become a nice tree in the future, I think.

Again I apologize for the lack of a before picture. I really must strive to do better in the future now that I am sharing this stuff online

I have coveted this variety of quince for such a long time and last weekend I finally found a couple to call my own. I am really looking forward to working on these guys and there’s lots of material to propagate from. 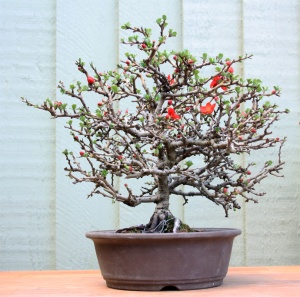 This Larch was collected in March 2012. At the time of collection it had enough fibrous roots to allow me to plant it straight into a plastic training pot. It grew so vigorously over the summer  that by July I felt confident enough to chop the trunk back to 2 branches and wire one of them up to form the new apex. Buy the end of the first growing season the branch that was wired to an upright position had set permanently and by the end of the second growing season, the chop had almost healed over completely.

I am sorry that I have no pictures at the start of the work in 2012. This first picture was taken in March 2014 after re-potting into a Koho pot and the second picture was taken 1 year after collection in March 2013.. I am pleased with the progress of this shohin larch and I am looking forward to watching its development in the future.

This is a little round basket pot which I acquired recently. It was made on a wheel from a beautiful cream coloured clay. It has a diameter of 8cm and a height of 3.5cm. The basket work is hand carved. I think it would look good with an accent planting or a small flowering prunus. 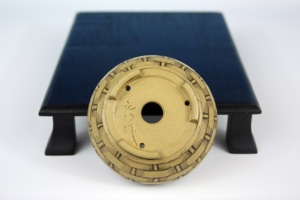 This procumbent juniper was collected from my garden in 2003. The roots and branches were cut back severely and it was placed in a deep plastic pot to recover. Unfortunately, I do not have any photographs from this early period. In 2006 it was removed from the plastic pot and placed in its current pot. Around about the same time, one of the horizontal branches was wired upward to form an apex. The branch set in a single growing season. No more work was carried out until 2011, when the first photograph was taken. At the start of 2011 the tree was removed from its pot and the roots were trimmed back.

Later in the same year, I began to style the tree for the first time. In the second picture, some of the lower branches have been removed and in the third, the foliage has been thinned out for wiring. 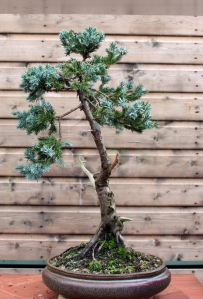 At this stage, I was still not sure which side would be the front, so in the next picture which was taken in 2011 after the first full wiring, the tree is turned in the opposite direction.

In 2012, I began to increase the amount of fertilizer given to the tree and it seemed to respond well. In the autumn, I was able to start work on the shari and jins.

In the final picture, taken in the autumn of 2013, you can see that the foliage pads are developing well and a little more work has been carried out on the shari. 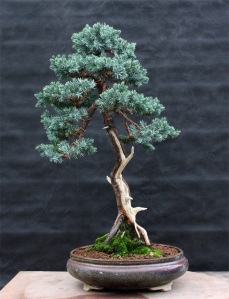 This is a Saxifraga “Your Smile” which has reached its peak today. The pot is by Walsall Ceramics 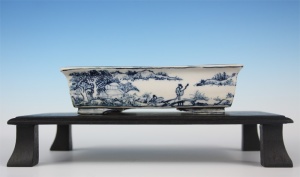 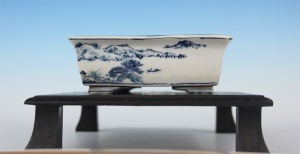 This is blue painted pot by Echizen Hosui, which has been in my collection for a few years, waiting for the right tree  to be paired up with it

I found this lovely gardenia last year at my local bonsai nursery. I think it could work well with the Hosui pot. 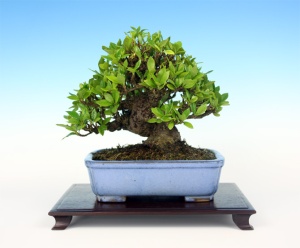 This is a recent photograph of my shohin cork barked elm, which I acquired in September 2011. 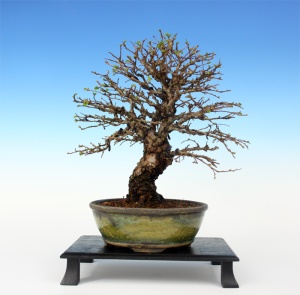 The second picture shows how it looked when I got it home. This species grows quickly and requires regular pruning and thinning. I wire the new growth in the winter and take it out of its pot each spring to trim the roots.

The third image shows the tree settling into its new Erin pot in the summer of 2012. 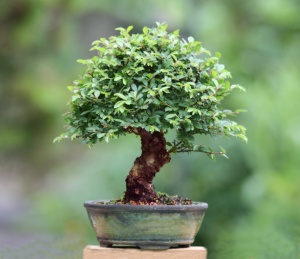 The last image, taken in October 2012 shows how the profile is developing,